Sophie Sanchez at the department of Evolution and Development has been awarded the Stensiö award for her outstanding contributions to bone palaeohistology. 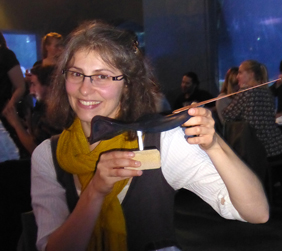 Sophie’s research focuses on the application of innovative techniques to study fossil bone, including three-dimensional virtual bone palaeohistology, using synchrotron X-ray microtomography. These approaches not only allow the bone histology of rare and large fossils to be studied non-invasively, but virtual palaeohistology also provides the potential for studying hard tissues in three dimensions. She applied these techniques to investigate the fish-tetrapod transition and showed the earliest evidence for the presence of bone marrow in the fin of the 380 million-year-old fish Eusthenopteron. By collaborations with colleagues she also made a major contribution to the development of new 3D models of hard-tissue arrangements among jawless, stem-jawed vertebrates and bony fishes. Most importantly, she also revealed the 3D orientation of muscle fibres in fossil bones and studied their relation to muscular function and developmental shifting. This discovery will have a major impact for reconstructing the musculature of early vertebrates