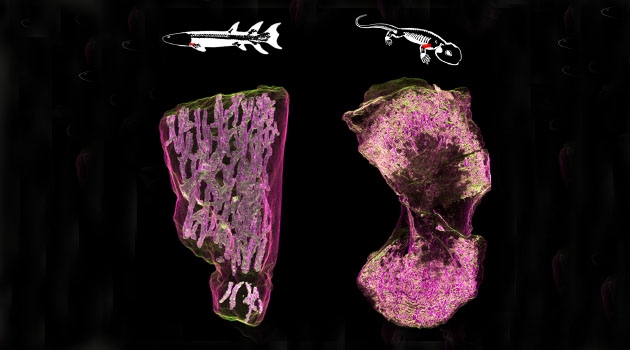 When and how bone marrow first originated in the limbs of early four-legged animals is disputed in evolutionary biology. With the help of powerful X-ray technology, an international research team, led by Uppsala University, has now discovered that this evolutionary adaptation most likely took place after the first tetrapods stepped ashore. The study is published in the scientific journal eLife.

“This means that the crucial process of developing red blood cells in the limb bone marrow occurred later than we previously thought,” says Sophie Sanchez, who is an associate professor at the Department of Organismal Biology at Uppsala University.

The first back-boned animals, or vertebrates, appeared and evolved in the water more than 500 million years ago. About 100 million years later the first four-legged animals, called tetrapods, crawled out of the water onto land. This major transition not only required obvious changes in how the animals moved around, but also physiological adaptations to their new environment. Among other things, they developed a new place where to make blood cells, a process called haematopoiesis.

Fish and aquatic frogs produce their blood cells in the liver and kidney, while the blood cells of terrestrial vertebrates originate from stem cells in their bone marrow. Some researchers suggested that this could be an adaption in land vertebrates to protect the delicate and crucial function of blood-cell production from damage caused by UV light and drastic temperature variations experienced on land. This means the migration of blood cell production from soft-tissue organs to the skeleton would most likely have occurred before or during the water-to-land transition.

Researchers from Uppsala University in Sweden, the European Synchrotron Radiation Facility in France, Comenius University in Slovakia, and Flinders University in Australia have now tested this hypothesis by investigating the inner structure of long bones in lobe-finned fish and early tetrapods, using synchrotron microtomography. The extremely high-resolution X-ray images obtained enabled the researchers to reconstruct the fossil bone structure in great detail in 3D.

One condition required for haematopoiesis to occur in skeletal elements is the development of an open marrow cavity where marrow cells can interact with both a centralised mesh of blood vessels and the inner bone surface, as seen in terrestrial vertebrates. In lobe-finned fish on the other hand, the marrow cavity is filled with bone walls that divide it into different tube-like structures and make exchange between marrow cells and blood vessels impossible.

The new 3D-models demonstrated that bone marrow processes in 360–380 million-year-old Devonian lobe-finned fish and tetrapods were forming separated long tubes that probably inhibited the development of a centralised blood mesh, thereby preventing haematopoiesis from happening in their fin/limb bones.

“This means that the migration of haematopoiesis into the bone marrow probably emerged in both amphibians and other terrestrial tetrapods after the water-to-land transition,” says Sophie Sanchez.

The researchers believe limb bone marrow most likely already played a role in limb-bone growth before it participated in the production of blood cells. The oldest animals they have studied so far in which open limb marrow cavities exist where haematopoiesis may have occurred, are the 300 million-year-old Seymouria and Discosauriscus, which are the precursors to the tetrapods that began to lay their eggs on land.