Development and evolution of reproductive organs in plants

We have approached the extensive variation in morphology of female reproductive organs among different major groups of conifers, by studying a range of developmental regulatory genes with potential functions in female organ development. By this approach we have established that the evolution of different morphologies has been associated with a shift in the timing of activation of reproductive development, in relation to the yearly season. By similar approaches, in combination with the use of a naturally occurring mutant, we have provided molecular genetic support for the notion that the ovule-bearing organ of conifer reproductive organs has evolved by reduction from a complex shoot structure. 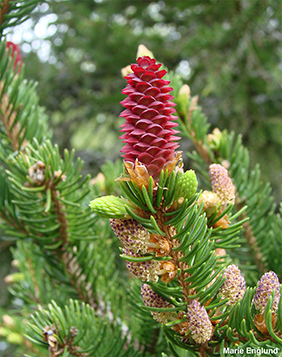 In multicellular organisms, such as plants, development is a process of cell divisions, followed by regulated and coordinated differentiation of the daughter cells forming the various tissue types. Key questions in developmental biology, therefore, are how this is occurring: What cues determine the fate of the cells? How do cells communicate for proper tissue patterning? How is cell proliferation versus cell differentiation determined? In plants, water and nutrients are taken up by the roots, and is then transported throughout the plant body via the vascular tissues, xylem and phloem. These tissues are organized in species and organ specific patterns. We use the model plant Arabidopsis thaliana to study the processes of cell fate determination, tissue patterning, cell proliferation, and differentiation in the development of the vascular tissues. These studies are facilitated by the regular and simple arrangement of the tissue types in the Arabidopsis root, and by its continuous growth, that allows us to track differentiating cells. We have in our research shown that transcription factors of the class III HD-ZIP family dose-dependently govern the patterning of a xylem axis in the root of Arabidopsis. The levels of these factors are determined by an intricate signaling between the vascular cells and surrounding cell-layers. A microRNA moves from the surrounding endodermal cell layer to target the mRNAs of the HD-ZIP III genes. This leads to a reduced level of these factors at the vascular periphery and higher levels in the center. High levels promote metaxylem cell identity in the central xylem axis and lower levels protoxylem at its periphery. It is, however, unclear by what mechanisms the HD-ZIP III TFs control xylem cell specifications. Therefore, our current focus is on how HD-ZIP III genes intersect with various signaling pathways, to control development and growth. In addition, we have recently initiated a project where we do comparative analyses of vascular development in the conifer Norway spruce, Picea abies. This project aims at increasing our general level of understanding of developmental control in a gymnosperm, but we also aim to find markers for wood quality and growth, with potential use in breeding projects of Norway spruce. 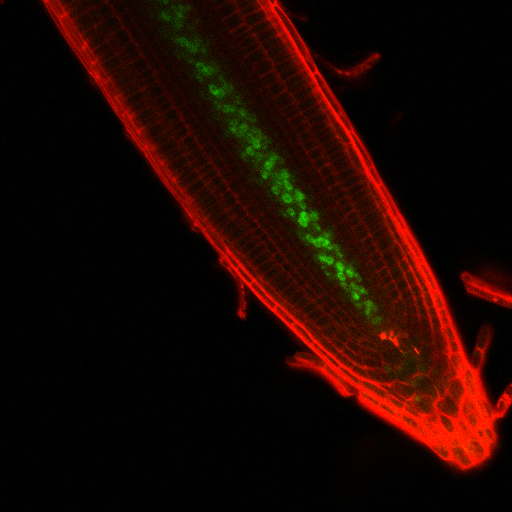 Scientific studies have provided us with an overwhelming amount of information about the certainty of climate change. Water scarcity, as a direct consequence of current global warming, endangers life conditions for many living beings, but for plants in particular, as sessile organisms, it supposes a major threat. Short-term exposures to drought generate a reduction in plant growth and seed production affecting agricultural and forest practices worldwide, but even survival can be eventually threatened if drought conditions persist. Therefore, the ability to cope with adverse conditions is particularly crucial for these organisms.

To face an adverse environment, plants switch genetic and physiological mechanisms aimed at producing an adaptive response which eventually will increase survival. Part of the genetic response to face drought is driven by certain genes called homeodomain-leucine zipper class I genes (HD-Zip I). These genes have never been found in other organisms but plants, and encode proteins that regulate the activity of other target genes in response to a stimulus. However, our knowledge about the exact functionality and the regulation of these proteins in the plant adaptability to stress situations is very restricted. Our research focuses on answering questions such as: Is more than one protein encoded by one HD-Zip gene as a result of different environmental stimulus? Which are the target genes of HD-Zip proteins and how are they regulated? Can distinct proteins differentially regulate the same target gene? Does the same HD-zip gene participate in several signalling pathways? We aim at providing further knowledge about the roles and transcriptional regulation of HD-Zip genes, focused on the understanding of the natural mechanisms involved in the plant transduction of drought stress signals.