My research is to a large extent linked to a special environment: flora and vegetation in the afro-alpine belt (above 3500 m) on the East African high mountains, but also deals with a Flora of Ethiopia and Eritrea and medicinal plants in Tanzania. Of those the mountains and the Flora have taken the main part of my time. The research on medicinal plants was limited to an inventory of some areas in the country, but because my interest in the use of plants in the tropics I managed to introduce Ethnobotany as a subject at Uppsala University.

It was my husband’s (Olle Hedberg) research that made me take an interest in the afro-alpine environment. Initially he dealt with an inventory of the flora in the alpine belt which he carried out on all the high East African mountains, followed by a taxonomic revision of the genera – a necessary prerequisite for all further botanical research in the area.

The major part of East Africa consists to a large extent of vast uplands at altitudes of 1000 to 2000 m, with a number of isolated high mountains. The vegetation of the highest parts of these mountains is famous for its remarkable life forms, which obviously is an adaptation to the very special climate with ”summer every day and winter every night” all the year round. During the day the temperature might raise to + 15 C to fall to - 6 C at night. This environment offers rich opportunities for several different research fields like systematics, ecology, biogeography, phylogeography and evolution, or a combination. As is obvious from the list of selected publications I have been engaged in a number of them.

Out of the five life forms the Giant Senecios and Giant Lobelias are the most conspicuous ones with their huge leaf rosettes, which close up at night and in that way protect the shoot apex against frost. In Dendrosenecio keniodendron the stem with its water-conducting tissues are effectively protected against the recurrent night frosts by a thick layer of marcescent dry leaves.

From an evolutionary point of view it is fascinating that exactly the same lifeforms have evolved in the páramo-vegetation on the corresponding altitude in the Andes of South America. But there it concerns quite different genera. Also the topography is quite different. Whereas the mountains of East Africa are solitary peaks which raise from a plateau, the equatorial Andes are structural complex of mountain ranges topped by isolated peaks and ridges. A similar setting is found in New Guinea. Similarities and differences between these alpine regions accounted for the project on “Island biogeography of tropical alpine floras”, run by two colleagues and myself, in which we analyse the effect of alpine area, geographical distance between mountains and isolation due to topography on mountain plant species richness, regional species turnover and patterns of species distribution. The results were published in 2013 and we are interested in extending the study to include also other mountain systems.

The species on the isolated East African mountain summits seldom have their near relatives further down on the same mountain but in the north temperate zone of Europe and/or Asia and South Africa. Sometimes it turns out to be the same species. Through early crossing experiments we have for instance shown that Arabis alpina occurring int. al. in mountain areas of Northern Europe is the same species that occurs up to 4900 m on Mt Kenya. Other researchers have much later shown that the species originated in Asia Minor. Since different species have very different phylogeographical history further research on various genera should result in important contributions to the knowledge about the origin of the afro-alpine flora and the significance of the geographical isolation in various respect. 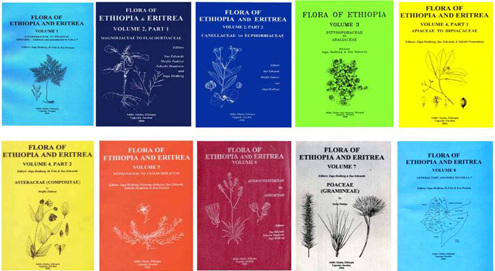 I am at present checking our material of unpublished data and going over the huge amount of photographs from various expeditions, which might be useful in documenting changes in the vegetation caused by human influence or, in the long run, by the climate change. I am also involved in efforts to produce a web version of Flora of Ethiopia and Eritrea.